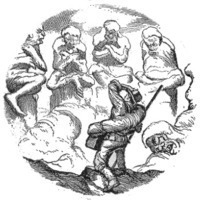 The Immortals of the Pre-Raphaelite Brotherhood

The Immortals of the Pre-Raphaelite Brotherhood

Up until now I have always thought that making best-of lists was a relatively modern popular media practice, but apparently not.

In 1848 Dante Gabriel Rossetti and the artist William Holman Hunt, founders of the Pre-Raphaelite Brotherhood, made a list of Immortals, artistic heroes whom they admired. They even gave each Immortal a star ‘rating’.

Once, in a studio conclave, some of us drew up a declaration that there was no immortality for humanity except that which was gained by man’s own genius or heroism. We were still under the influence of Voltaire, Gibbon, Byron, and Shelley, and we could leave no corners or spaces in our minds unsearched or unswept. Our determination to respect no authority that stood in the way of fresh research in art seemed to compel us to try what the result would be in questions meta physical, denying all that could not be proved. We reflected that there were different degrees of glory in great men, and that these grades should be denoted by one, two, or three stars. Ordinary children of men fulfilled their work by providing food, clothing, and tools for their fellows; some, who did not engage in such labour, had allowed their minds to work without the ballast of common-sense, but the few far- seeing ones revealed vast visions of beauty to mankind.

Where these dreams were too profound for us to fathom, our new iconoclasm dictated at least a suspended judgment, if not distrust; for of spiritual powers we for the moment felt we knew nothing, and we saw no profit in relying upon visions, however beautiful they might be.

Arguing thus, Gabriel wrote out the following manifesto of our absence of faith in immortality, save in that perennial influence exercised by great thinkers and workers —

We, the undersigned, declare that the following list of Immortals constitutes the whole of our Creed, and that there exists no other Immortality than what is centred in their names and in the names of their contemporaries, in whom this list is reflected —

Some of the entries to this list are surprising, some relatively obscure to the modern eye (well, at least mine - I still need to research some of them!). The ratings of 0, 1, 2, 3 or 4 stars also jars on occasion.

Evelyn Waugh annotated the page in his copy of the book, expressing some of his astonishment at the list: